Every year after passing our annual reviews, my University friends and I go on a trip to a town with a scary name of Todmorden. Todmorden is located in Northern England on the boundary between Yorkshire and Lancashire. If you split this name into two words, you will get ‘tod’ evoking associations with a German word ‘Tod’ meaning ‘death’ and ‘mor’ resembling a French word ‘mort’, which also means ‘death’. In other words, or playing with words you may easily get something like ‘deadly death’ or ‘death-death-something’. These associations make an aura of the place:D

Todmorden is full of legends about the origin of its name. One of the stories goes back to the 15th century and tells of the Wars of the Roses. Without going into detail, I just say that bloody conflicts occurred between two rival groups of the English elite belonging to the dynasty of Plantagenet, the branch of Lancaster, having a red rose as its symbol, and the branch of York with a symbol of a white rose. 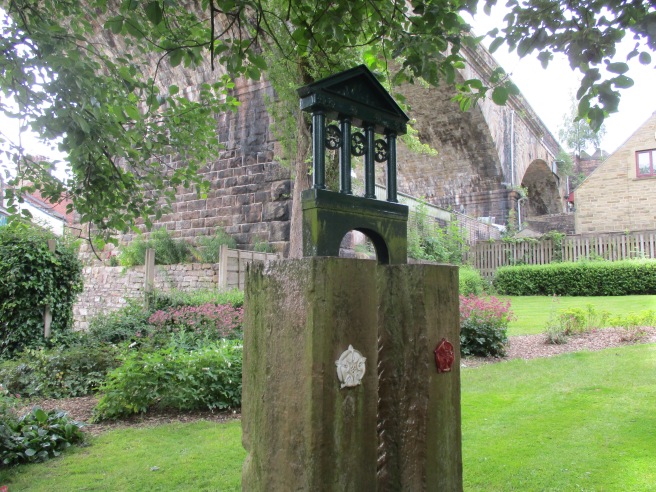 Centuries passed, and today local cricket clubs use red and white roses as their emblems rivaling on the cricket pitch only. Now only the monument under the railway arc resembles the Wars of the Roses. However, there are no inscriptions on stone. It is quite hard to understand, whether stone roses refer to the past wars or the present sports competitions. I am guessing to both of them;)

The town and surroundings of Todmorden are also noteworthy by its industrial past and its farming present. In the 19th and 20th centuries, this area was considered to be working-class because its residents mainly were employed in heavy industry and cotton mills located in the same place. However, after the 1970s most of the industry was dismissed that changed the local economy and life of the working-class community.

Now Todmorden is gentrified and has a mixed social composition. People belonging to different social classes live there. What is remarkable that this social hierarchy is visible in the landscape of the town and its surroundings. With friends, we enjoy walking in the countryside and hiking in the hills around Todmorden. Whenever we go up to the hills, I have a feeling that we move from the bottom to the top of the social hierarchy. If you have not stopped reading yet, I invite you to climb the hills together and see what can be found on the way.

In the valley, one can see a six-storey building of the Robinwood mill. This cotton mill was constructed at the beginning of the 19th century. Its owners also built around some housing blocks for workers and more beautiful villas for managers. The mill building looks brutal and stable. It was made of stone bricks and reconstructed several times. The front of the building has some traces of a fire. Locals say that somebody set fire to the mill to make money, and now some parts of the building are for sale. 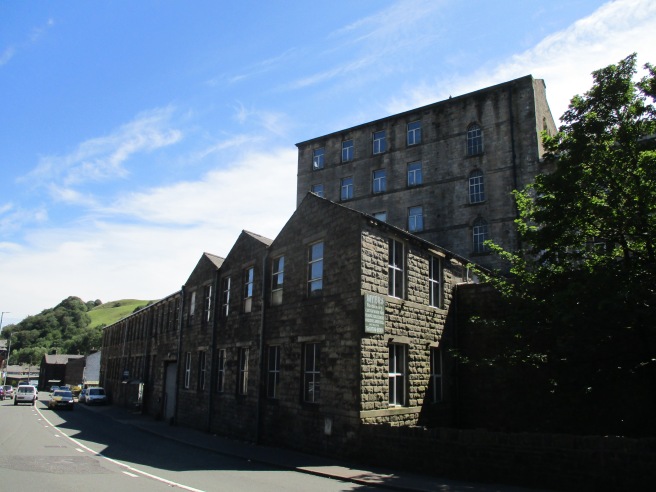 And what’s about housing? In the valley, one can find old well-built houses where mainly pensioners live and some social housing blocks for workers. Houses for pensioners (some of them belong to a local working-class community) are of low height with solid walls of stone brick, nice chimneys, double-glazed windows, through which one can see pot plants and house cats. There are small gardens with rosebushes in front of these houses. Sometimes the residents hang laundry outside.

Relatively ‘new’ social housing resembles by its architecture typical council estates in England. It is two-storey housing blocks with flat and gable roofs, simple facades, and windows of different sizes. If you have a look at a window, you may see lace curtains and fresh flowers in vintage vases. Some residents put English cross flags on their windows with expressing their national identity and white-and-blue flags, which meaning I could hardly ever get. Life of people living in the valley seems to be hard.

Social housing at the bottom of the hill, July 2019 © Photo by A. Vanke

Having looked around in the valley, we are going up to the hill. Several routes are leading to the top. Every time we explore a new route that allows us to know the local area better. The middle of the hill has picturesque views of the town with the cotton mill and small houses scattered in the valley. There are more trees and shadows here. At some point, you may realize that you are in the middle of nowhere. But soon you understand that the local middle class occupies this place on the hill.

This awareness comes, when you see another type of housing and small shiny cars of bright colours, red, yellow, white driving up and down the hill. I would say that houses in the middle are more diverse in design and style, but all of them have something in common. For example, middle-class houses are normally bigger than those we saw at the bottom. They may have more spacious yards and nicer gardens. If you come across local farms you will see that farmers usually have a piece of land near their houses. 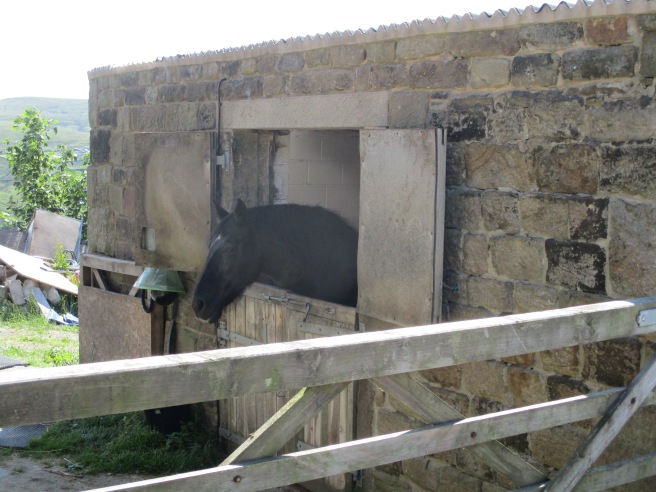 This land needs to be cultivated by tractors. And we met one friendly tractor driver cultivating lands of different farmers. According to locals, the life of farmers is far from easy today. They produce meat, milk, cheese, eggs, and other foodstuffs, and sell them in the town market. While we were wandering around the farms, we met nice animals:) smiling horses, sleepy cows, lazy sheep, curious ostriches, beautiful deer, cute ponies, and funny buffalos. From the middle of the hill, life seems to be pastoral but still hardworking.

A picturesque pastoral view, July 2019 © Photo by A. Vanke

We keep on moving to the top. And what we find there? From the top of the hill, you will see picturesque panoramic views of the countryside with its beautiful fields, farms, other hills, and windmills. If you look more carefully you can notice villas hidden in the foliage of old trees. The villas are often surrounded by fences and sometimes by the barbed wire. Yes, exactly like this *Х*Х*Х*  That’s why it is quite problematic to understand what is happening there because villas are hidden from the public eye in contrast to the houses in the middle and at the bottom of the hill. However, you will feel the atmosphere at the top of the local social hierarchy.

Villas on the top looks spacious and beautiful. Some of them resemble small castles surrounded by the piece of land which is not cultivated but used for the golf course or gardens. Some villas’ owners have greenhouses in their territories and decorate their yards with elegance and style. While we were going down, in one villa, I noticed a straw hat accurately laying on the garden armchair. In another one, a bonsai garden with accurately cut evergreens drew my attention. The people from the top of the hill drive Range Rover cars and keep dogs barking at passers-by.

I was thinking that life on the top might be aisé. However, barking dogs, fences and barbed wires were telling us that life was not easy there too.

Going down to earth

Our way back was much easier than to the top. When you are coming back you can see all types of houses in the distance. At that moment you may realize that social hierarchy exists and it is visible in the landscape. We were going down, down and down to earth, and finished our trip in the Golden Lion pub, a very popular local spot.

View all posts by Alexandrina Vanke

3 thoughts on “Todmorden. A town with a scary name and social hierarchy”